The book 500 Places to Take Your Kids Before They Grow Up takes you across town and around the globe to 500 of the most exciting places on earth. In this selection of 35 destinations, we cover highlights from seven categories that will inspire even the most jaded child or world-weary parent. We’ll give you the advice you need to plan a trip the whole family can enjoy â€” and remember for a lifetime.

In 1587, on Roanoke Island, between the Outer Banks and the North Carolina mainland, 120 men, women, and children landed to settle Englandâ€™s first permanent New World colony. Virginia Dare â€” granddaughter of their governor, John White â€” was born that year, the first child of English parents born in America. When White sailed back to England, he intended to return within the year.

But a war with Spain kept White away from Roanoke for three years; what he found on his return in 1590 was a mystery. The rudimentary houses that he had helped build were dismantled, the entire area enclosed by a high fortlike palisade. No trace of the â€œLost Colonyâ€ was ever found.

The visitor center at the Fort Raleigh National Historic Site tells the colonyâ€™s baffling story in exhibits and film; outdoors, all thatâ€™s left of the fort is a silent mound of dirt, preserving the siteâ€™s sense of mystery. Yuâ€™ll also want to flesh out the story by visiting the more commercial Roanoke Island Festival Park, mid-island in Manteo. A 69-foot-long three-masted bark, the Elizabeth II, lies moored across from the waterfront â€” a composite 16th-century ship built for the 400th anniversary of Sir Walter Raleighâ€™s first exploratory voyage to Roanoke in 1584. 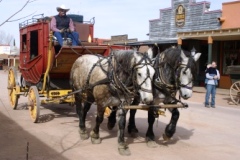 Tombstone, â€œthe town too tough to die,â€ is a classic tourist trap kids love â€” especially when actors reenact the famous Gunfight at the O.K. Corral. But only 25 miles south is the much more authentic Bisbee, one of the best-preserved historic towns in Arizona. Within day-trip distance from Tucson, Tombstoneâ€™s hokey attractions make a tempting lure for the kids; swing on down to Bisbee for the real deal.

Tombstoneâ€™s historic district has several imposing buildings among the gussied-up saloons and former bordellos lining the main drag, Allen Street. Thereâ€™s a daily reenactment of the famous gun battle at the former livery stable known as the O.K. Corral.

Bisbee never became a bona fide ghost town, but it still looks like a slice of the past. Old Victorian buildings line narrow winding streets, and minersâ€™ shacks perch on the steep hillsides above downtown. Get an overview at the Bisbee Mining & Historical Museum, a Smithsonian affiliate with interactive exhibits, a re-created mine tunnel, and dioramas depicting Bisbee in its boomtown days. 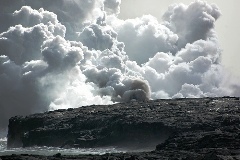 Hawaii Volcanoes National Park beats out all the other U.S. national parks on two scores: It has the only tropical rainforest, and it has the only active volcano. Since 1983, the Big Islandâ€™s Kilauea volcano has been erupting regularly, although these are â€œquietâ€ eruptions, with gas escaping slowly instead of exploding violently. Its slow-moving red lava oozes over the landscape, sometimes even over the park roads. The kids may wish they could see volcanic fireworks, but once theyâ€™re here, feeling the soles of their sneakers getting gummy from the heat below, theyâ€™ll realize this is spectacular enough.

If the volcano is actively erupting, call the visitor center for directions to the best locations for night viewing â€” itâ€™s quite a sight, watching as the brilliant red lava snakes down the side of the mountain and pours into the cold sea, hissing and steaming ferociously. 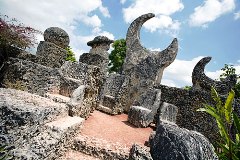 Coral Castle is probably the strangest attraction in Florida. Hewn by one solitary folk artist out of some 1,100 tons of pastel-tinted coral rock, this prehistoric-looking roofless â€œcastleâ€ harks back to an earlier age of Florida tourism â€” a time when the weirder and wackier a roadside attraction was, the better.

In 1923, a Latvian immigrant named Edward Leedskalnin moved to South Miami and spent the next 28 years of his life carving huge boulders of coral rock into this collection of outdoor sculptures, including such odd features as a moon fountain, a rocking chair, a table shaped like a heart, and another table shaped like the state of Florida.

Although nobody ever actually saw Ed working on it, Ed himself, being from a family of stone masons in Latvia, claimed that he worked at night using secret techniques passed down through the ages, the same techniques that allowed slaves to build the Great Pyramids. Hmmm. 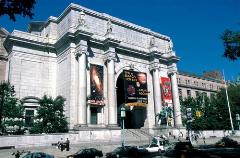 How many children have fallen in love with dinosaurs in the echoing galleries of this world-class museum? When you enter the rotunda at the top of the Central Park West steps, a rearing skeleton of a mommy dinosaur protecting her baby from a small, fierce predator clues you in that the interactive fourth-floor dinosaur halls are the perennial attraction. Must-see sights are the dioramas in the North American Mammals â€” the grizzly bear raking open a freshly caught salmon, elks lifting their massive antlers, wolves loping through eerie nighttime snow â€” or, on the floor above, the bi-level African Mammals Hall, where you can circle around a lumbering herd of perfectly preserved elephants or check out the giraffes browsing by their water hole.

In the dimly lit Ocean Life room, a gargantuan model of a blue whale swims overhead while dolphins arc through plastic waves. he Rose Center for Earth and Space, a 95-foot-high glass cube, includes an interactive exhibit on the nature of the universe, where you can step on a scale that shows your weight on Saturn, see an eerie phosphorescent model of the expanding universe, and touch cosmic debris. There are an IMAX theater, a space show, and always at least a couple of traveling exhibitions. 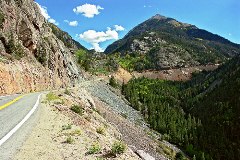 Close to the Four Corners, where Colorado, Utah, Arizona, and New Mexico meet at right angles, this 256-mile loop of highway is one of the countryâ€™s most spectacular drives, taking in the whole panorama of the Southwest â€” from ancient Native American cliff dwellings to Wild West towns to smart ski resorts, all against an incredible backdrop of 10,000-foot-high Rocky Mountain passes, canyons, waterfalls, and alpine meadows.

I prefer to follow the circuit clockwise from Durango, saving the most breathtaking scenery for the end. You can drive it in 1 day, but there are enough intriguing stops en route to make it worth 2 or 3 days. 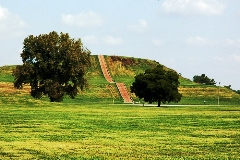 It was once the biggest city north of Mexico, with somewhere around 20,000 residents â€” farmers, hunters, craftsmen, traders, priests â€” at its peak in A.D. 1100â€“1200. An air of mystery hangs over this site, just across the Mississippi River from St. Louis. Who were these people (archaeologists have named them Mississippians) and what was their world like? The answers are hauntingly elusive.

One thing archaeologists found was the remains of an astronomical observatory, similar to Stonehenge but built of red cedar logs instead of stones. Woodhenge, the scientists have named it. How did two prehistoric cultures on different continents each get the same idea? And why did this great Mississippian city die? Archaeologists keep on digging, for they still have a lot of questions to answer.

After viewing the visitor centerâ€™s model of the ancient city, you can take tours of three different sections of the 2,200-acre site â€” hour-long ranger-led tours, or 30- to 45-minute self-guided walks of each area. 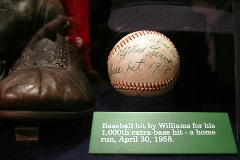 The Baseball Hall of Fame in Cooperstown sets the gold standard for sports museums. The very word Cooperstown has become synonymous with baseball history, for legend (now discredited) claims that Abner Doubleday invented baseball here. Opened in 1939, the Hall of Fame has been around long enough to amass an unparalleled collection of sports memorabilia. You don’t have to be a statistic-spouting baseball fanatic to feel moved by this homage to America’s pastime.

You’ll learn about the Black Sox scandal of 1919 and how baseball survived World War II. Special galleries are devoted to topics such as the Negro Leagues and the women’s professional leagues. Snippets of vintage broadcasts and video footage of historic games are played at the touch of a button. Exhibits paying tribute to today’s stars and teams are set in a replica major-league locker room. Save the actual Hall of Fame gallery for last, and by that time, those names on the plaques really mean something. 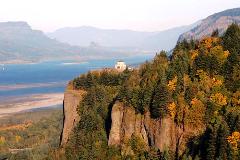 Gouging out the jagged border between Washington and Oregon, the Columbia River bores through the Cascade Range in one of the most beautiful river gorges in the world. The Columbia River Gorge has panoramas carpeted in lush dark-green forest and spangled by crystalline waterfalls.

Along U.S. 30, the Historic Columbia River Highway, you’ll sweep close to waterfalls â€” there are no fewer than 77 in the Gorge â€” and rise to breath-catching vistas. When U.S. 30 leaves the river, continue on I-84 past the Bonneville Lock and Dam to the Bridge of the Gods, where Indian oral tradition claims a natural rock bridge once existed. Cross the bridge to Washington to visit the Columbia Gorge Interpretive Center
. 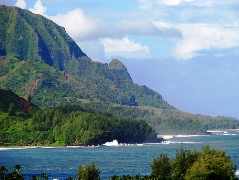 When it comes to beaches, Hawaii has more beauties than any one state deserves; truth to tell, the garden isle of Kauai on its own has more stunning beaches than any state deserves. With its tropical greenery, golden sand, ocean cliffs, and purposely low-key development â€” no building may exceed the height of a coconut palm â€” this island is a beach lover’s dream.

Few can resist the temptation of hanging out at popular Hanalei Beach on the North Coast â€” 2 miles long, with relatively placid waters good for swimming, and all the restrooms and other beachfront facilities that are necessary when you’ve got kids with you.

Still, for the best family beach on Kauai, many votes go to Poipu Beach, on Kuaia’s sun-soaked south shore. Big, wide Poipu Beach Park is the place to hit the sand. Equipped with restrooms and showers, a picnic area and restaurant, the beach is incredibly versatile â€” head to the left of the sandbar and you find a calm, child-friendly sandy-bottom pool protected by a lava-rock jetty; head to the right and you face an open bay of turquoise water that attracts swimmers, snorkelers, and surfers.